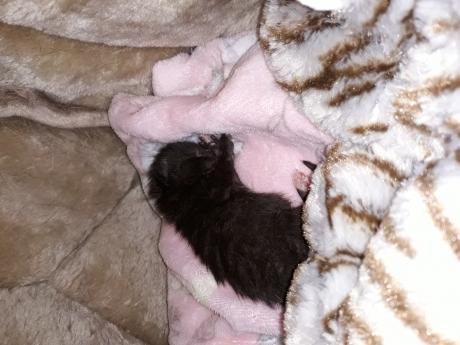 We were told about a queen who had given birth to four kittens outside. Mum was feral so we needed to humanely trap her to get her and the kittens to one of our fosterers.

When we got there we found that mum had gone taking two of the kittens with her she hadn't returned in twelve hours so it was unlikely she was coming back, one of the remaining kittens had sadly died and the other wasnt far off, he was only a day old we knew his best chance was to get in the warm and fed. We snuggled him in to a jumper and with the car heater on full blast rushed him home. The foster home had a nursing queen (Calissi ) and we tried put the kitten with her to see if she would nurse him. While she did her best Lucky, as we decided  to call him seemed distressed and cried constantly.

By Sunday his weight had dropped and it looked like he wasnt going to make it, he had previously rejected a bottle but we decided to give it one more go, this time Lucky latched on and with his ears wiggling he took his first real feed in days.

Hand rearing a kitten is no small undertaking it involves feeding every two hours day and night stimulating with a cotton wool ball to make the kitten go to the loo and keeping him warm with heated pads.

Slowly over his first week his weight grew, his umbilical cord dropped off and his eyes started to open. We used a tooth brush to stroke him as that feels like a mum cats tongue and weigh him before and after each bottle to ensure hes gaining weight. By the end of his first week his weight rose from 86 grams to 154. Little Lucky has a long way to go before he can be adopted but we will keep you updated of his progress .

Charlie is making himself comfortable in his new home.