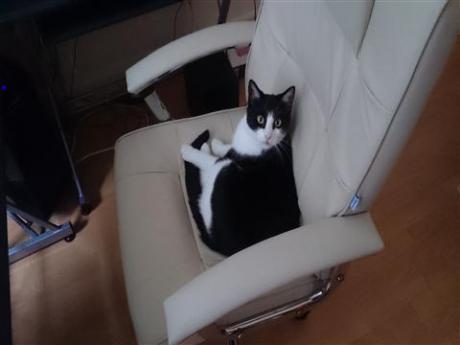 Doogie has found a new home in Bonny Scotland

Here's an update from Doogie's owner: "I adopted a kitten called Doogie from you back in December, he was being fostered by Sue in Wallsend, and I thought I should write just to let you know how he's getting on, and send along a few pictures. He's grown quite a bit, quite a lot actually. I've been careful to regulate his food but he's still managed to become a chubby little chap. Although I was living in the Consett area when I adopted him, I have relocated to the suburbs of Glasgow. Here there are large gardens out back which are ideal for cats, but unfortunately Doogie is still a bit nervous about going outside. And he still can't understand the accent."

Charlie is making himself comfortable in his new home.